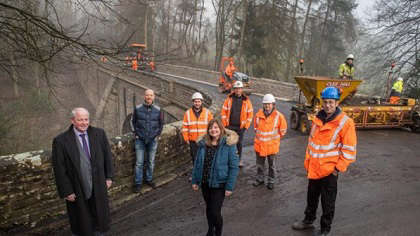 A major repair scheme on Broughton Bridge off the A59 in Skipton has been completed and under budget.

Our bridges team has repaired the bridge and its retaining walls in order to protect the historic listed structure and its vital link to Broughton Hall. The cost of the scheme was £901,810; almost £150,000 under the original budget.

“Our teams have been on site since March carrying out one of the most extensive bridge repair schemes we have delivered in the county in recent years,” said Councillor Patrick Mulligan, of the Airedale division.

“The essential work has included the dismantling and rebuilding of the retaining walls, which are between six to nine metres high in places, and 70 metres wide. The buttresses and parapets were also rebuilt – all using the existing stone – and the steel braces inserted into the bridge have been removed and reinforced.

“The road has been closed to all vehicles and pedestrians for the duration of the work so we would like to thank the public for their patience. It has been completed to a very high standard to ensure the bridge will be fit for future traffic demands.”

Broughton Bridge is a key access route for anybody travelling to nearby Broughton Hall Estate. The current custodian Roger Tempest said: “On behalf of the local community we would like to show our gratitude and thanks for the rebuilding of Broughton Bridge. It was originally arranged to be built by the Tempest family in 1791 and with the restoration we hope it will last another 200 years and beyond.

“The County Council bridges team deserve full praise for leading the project to a successful conclusion and we thank the contractors for their role in the build. Our community can now benefit from its use and enjoy the historic and unique surroundings.”