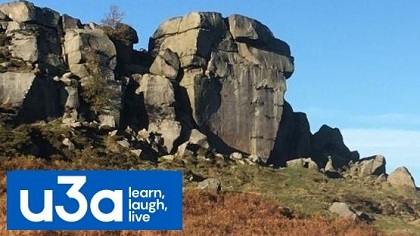 Members of Ilkley and District u3a heard at the groups annual general meeting last week that despite a challenging year because of Covid and the lockdowns, the organisation had emerged stronger than ever with an increased membership, more activity groups and four new trustees.

Angie Grain, the Chair, thanking the members for their contribution over the year Angie said, “It is to the credit of a huge number of volunteers and helpers that our u3a has managed to keep as active as possible within the changing constraints through time to keep us engaged with each other via a range of virtual activities.”

When lockdown restrictions were lifted, u3a activities that had previously been curtailed, were gradually able to resume. In June National u3a Day was celebrated with a series of events - outdoor promotions in Ilkley and Otley, and a special high tea event at the Clarke Foley Centre. Most u3a events went ‘live’ again including the Summer Programme, monthly Saturday talks, Meet the Leaders event, and Drop-ins.

Since September, many activity groups have started face-to-face meetings again and the overall number of groups offered to members has grown, particularly in Otley where the successful introduction of local ‘Ambassadors’ has increased awareness of the u3a. To stimulate even more interest, the ‘Ambassador’ idea will be rolled out to other towns and villages throughout the district over the next few years.

Throughout the traumas of Covid, the Ilkley u3a membership has remained loyal with very little fallout. As new members have joined, membership numbers have increased to surpass the pre-pandemic total. The Chair welcomed four new trustees - Mark Hall, Margaret McCabe, Alison Middleton and Sandra Nistri - who were voted in at the AGM and thanked the outgoing trustees - Hugh Bevington, Lynne Rhodes-Holme and Roger Hawkins - for their contribution.

Summing up the past year, Angie commented, “Overall, I hope that we have a u3a to be proud of, which has been flexible, positive and supportive through a very difficult period. As we move forward from the lockdown period, we will continue to adapt, learn and endeavour to provide the best possible experience for our members.”

The AGM was followed by an entertaining talk on ‘Magical Monaco ‘ by Graham Read. Graham is Formula1 correspondent for four newspapers, including the Yorkshire Times. He has visited Monaco on numerous occasions and has taken some stunning images which he used to illustrate his talk. The talk included some fascinating insights into the Principality, its history, its Royal Family, casino, Hotel de Paris, and of course, the Grand Prix and Rally.

Ilkley & District u3a has over 140 activity groups, including sports, music, languages, creative writing, science and technology, arts and crafts, local history, dancing, and walking. Membership is only £13.50 a year and is open to those in the area who are retired or semi-retired. More information about the u3a and how to join can be found on the website at ilkleyu3a.org on Facebook and Twitter.