Let Me Entertain You

Pick up a free comic from local libraries 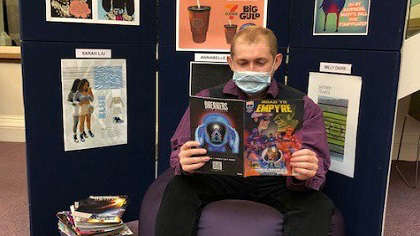 Customers at Skipton and Ilkley libraries and others across North and West Yorkshire will be able to pick up a free comic from Friday, 12 November.

The libraries have teamed up with Thought Bubble to offer free comics and graphic novels for people to take home and read or give to a friend.

The comics will be available on a first come, first served basis and include titles from major publishers such as Marvel and DC and stories featuring characters including Batman, Superman, Wonder Woman, the Avengers, the X-Men, Tomb Raider, Transformers and many others.

The giveaway is in conjunction with Thought Bubble, the Yorkshire Comic Art Festival, which this year is taking place in Harrogate, with a two-day event at Harrogate Convention Centre on Saturday, 13 November, and Sunday, 14 November.

Thought Bubble events will run in various parts of Yorkshire in the week leading up to the convention, and the giveaway is one of two fringe events being held by libraries.

County Councillor Greg White, Executive Member for Libraries, said: “Comics are not only fun, but can be a great way for children to develop their love of reading, so this giveaway is not to be missed. The county’s libraries has an extensive range of comics and graphic novels for children and adults – both in branches and online – so anyone who enjoys comics or wants to rediscover them should visit their library or search our online catalogue to see what’s on offer.”