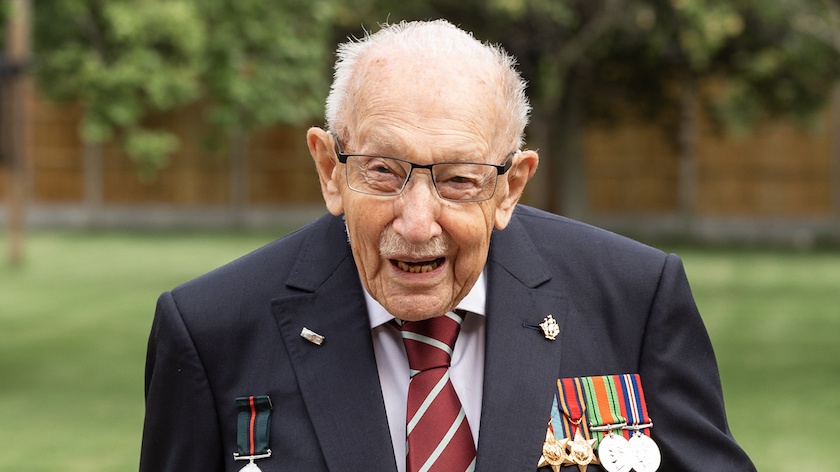 Bradford Council is supporting a fundraising campaign to install a bronze sculpture of Captain Sir Tom Moore in Keighley.

Captain Sir Tom Moore, who was born and raised in the town, touched the hearts and minds of people across the UK and around the world with his fighting spirit and optimism during the COVID-19 pandemic.

On the eve of his 100th birthday, he decided to raise money for the NHS by walking laps of his garden. When he began his journey, with the aid of a walking frame, his goal was to raise £1,000. But this simple act got the attention of the world’s media and, as the news travelled, donations flooded in and he raised over £32 million and attracted the admiration and affection of millions more.

A bronze life size statue called ‘The Walk of Hope’ has been designed and commissioned by  Tony Clark and Keith Sharratt and was created last year.

The two artists are now trying to raise £60,000 to cover the costs of the statue and it is hoped that is will eventually be installed in Keighley as a tribute to his extraordinary life and huge fundraising achievement.

Saira Ali Team Leader of Bradford Council’s Landscape, Design & Conservation Team is leading on the Council’s support for this campaign and supporting efforts to get it moved to Keighley. Sir Tom’s family will also be consulted to make sure they are happy with this tribute.

Money is being raised via a Go Fund Me webpage - https://uk.gofundme.com/f/captain-sir-tom-moore-bronze-statue . If the target amount is exceeded, the excess funds will be shared between the Captain Tom Foundation and veterans’ charities.

Cllr Alex Ross-Shaw, Portfolio Holder for Regeneration, Planning and Transport, said: “We feel that this statue would be a great way to honour Captain Sir Tom so we are happy to support this campaign and help to get it installed in Keighley where he was born and brought up.”

A suitable location for the statue will be sought in Keighley town centre and discussed with local stakeholders. The statue will go on a plinth with a plaque on it.