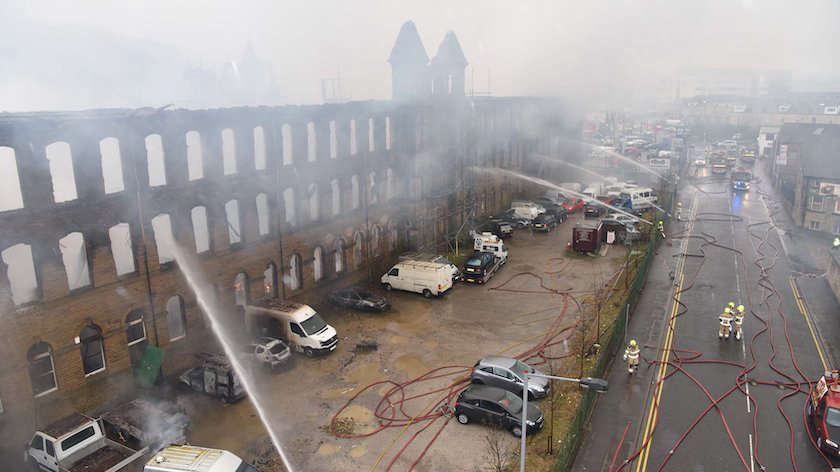 Five juveniles have been arrested on suspicion of arson after the fire at Dalton Mills in Keighley which has destroyed the inside of the historic building.

West Yorkshire Police have confirmed they're treating the fire as suspicious and have appealed for anyone with information or dash cam footage from Dalton Lane before the fire started to contact them.

In a statement, the force said: "Officers were called to the fire on Dalton Lane shortly after 12pm yesterday afternoon. No one was in the building at the time.

"Five arrests have been made and the investigation is ongoing.

"Bradford CID would like to appeal for any witnesses who may have seen anything suspicious around 11.30am – 12pm. They are also looking for drivers who were in the area at the time who might have dash cam to come forward."

Any information can be given to Bradford CID via 101 or the live chat facility at www.westyorkshire.police.uk/contactus quoting crime ref 13220116901. Information can also be given to Crimestoppers on 0800 555 111.

Inspector John Barker from Keighley Neighbourhood Policing Team said: "I would like to thank all the emergency services and partners for the swift action taken at this historic building. There was a significant risk to the public and we worked together to minimise that risk by putting out the fire and making the building safe. We quickly identified suspects and made five arrests.

"I would like to thank residents in the area for their patience, officers from our Neighbourhood Policing team are supporting our colleagues at the fire service there. Dalton Lane will be closed into the weekend.

"I would like to appeal to anyone who may have information about the fire or who saw anything suspicious to come forward."

Emergency services were called to the mill yesterday lunchtime (Thursday), with around a hundred firefighters dealing with the fire at its height.

West Yorkshire Fire & Rescue Service say damping down is continuing at the site this morning (Friday), with one fire engine and one aerial appliance still there.