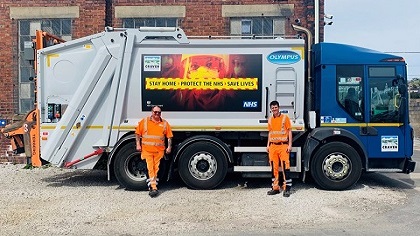 Waste and recycling bosses have been urged to consider introducing European-style collection systems, such as creating central points where residents deposit their waste, as part of a radical overhaul.

A meeting of North Yorkshire County Council’s transport, economy and environment scrutiny committee was told that merging the district and borough and councils’ waste operations with those of the county council ahead of the unitary authority’s launch next year represented an opportunity to “work better in terms of waste minimisation”.

Councillors were told while a review of how waste should be collected in the county was under way, the government had inferred the separate kerbside food waste collections would become mandatory, meaning residents would have another bin outside their homes in future.

The meeting was told one of the most frequent issues raised to councillors was residents’ appealing for help to improve their recycling rates, while residents were also facing a growing volume of separate bins outside their properties.

The meeting heard there was clear scope for improvements in the waste collection system in the county.

Councillor David Staveley said: “We have all seen the new estates that turn up and it looks like a scene from the invasion of the Daleks. There’s a red one, a green one, a brown one a blue one, all these different coloured bins all stacked up.”

The meeting was told many European waste collections were from a central skip buried underground with a post box-style top.

Councillors were told such schemes could benefit urban areas and where people live closely together, such as North Yorkshire’s coastal villages, but in rural areas there would be issues over where the skip was sited.

Officers commented while such a scheme would put an increased onus on residents to consider the waste they were producing, it would also be a “cultural shock”.

Coun Staveley replied that 10years ago it would have been unheard of having electric vehicle charging points, solar panels or ground source heat pumps in new-build homes.

He said with central waste skips residents would not have to find space for the growing list of separate bins.

Coun Staveley said: “It’s not good enough just to say people might get a bit shocked. People get shocked about a lot of things in life, but I think the world has moved on in the last couple of years and we are open to all sorts of new ideas.”

Coun Haslam added: “I fully support a more radical approach, particularly as between now and 2025 there are probably going to be about 20 per cent more houses built.”