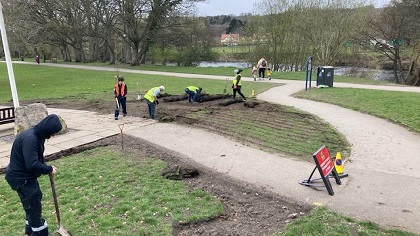 Following the easing of lockdown restrictions, Friends of Ilkley Riverside Parks are back and have started work on new memorial flowerbeds.

FOIRP volunteers have worked hard over the Easter break, as the crowds returned, to keep the park area clear of littler with daily litter picks and working with the Bradford Council on plans to ensure the summer is less frenetic than the last one!

The big news is they have started work on creating new flowerbeds at Riverside Garden’s Memorial area. Users of the area may recall the work done after the previous Lockdown in early summer last year, when the area was cleaned and benches and plaques were renewed and repainted, and the area power washed.

“We are aware it’s been a tough time for everyone during the pandemic we felt it would be great to put smile back on people’s faces and to create a beautiful area for contemplation and enjoyment around the War Memorial at Riverside Gardens’”, said Ed Duguid, Chair of the Friends

“We have extensive plans to improve the whole of the Embankment area surrounding the memorial. However, Phase 1 is to focus on the immediate area around the memorial itself, and we are pleased the Council has given us permission to proceed with the first part of our plan. Hopefully, those who have been watching our work will now know where we are focusing our efforts”.

FOIRP has been wonderfully supported by a group of local landscape gardeners led by Helen Taylor, all of who have donated their time and expertise for free. After several meetings the gardeners group were able to scope out the area and have provided an exciting planting scheme.

In addition, they have been able to donate some plants through their contacts and FOIRP are grateful to local Co-op members who helped them raise over £4000 last year, and a substantial amount of these funds are being used to enhance the area for the benefit of all visitors to the Parks. Over £2500 of new plants and shrubs will be planted in the area.

Alan Titchmarsh, who started his gardening apprenticeship in Ilkley and is also a Patron of the Manor House, has agreed to officially open the new flowerbeds later in the year. In honour of this the group will be planting a rose, named after him, Rosa Alan Titchmarsh, as a centrepiece in one of the beds.

Apart from the new flowerbeds, there is much more to come in 2021 in the Parks. FOIRP continue to Litter Pick twice a week on Tuesdays and Saturdays, although many of their members take their Litter Pickers on their daily walks through the park areas. FOIRP have just launched our new 2Minute Litter Pick Station, situated outside the Riverside Hotel, where anyone can borrow a Litter Picker and Litter bag and do a quick Litter Pick.

“Of course it is all very well people picking up litter, “said Ed, “we really need a massive change in culture, so visitors to the parks do not feel they can just drop litter or alternatively just try to stuff it into overfull bins which then falls to the ground and is blown around the parks. If the bins are full they need to take it home and pop it in their own bin.

“We will also continue with cleaning and repainting bins and benches, trimming the paths and working with the Council to make the parks as good as we can manage.

If you have any ideas, questions or would like to join, the group can be contacted through the website: friends-of-ilkley-riverside-parks.com, email foirp2@gmail.com or via the groups social media.