I Don't Wanna Lose You

Third heat line-up for local Battle of the Bands competition 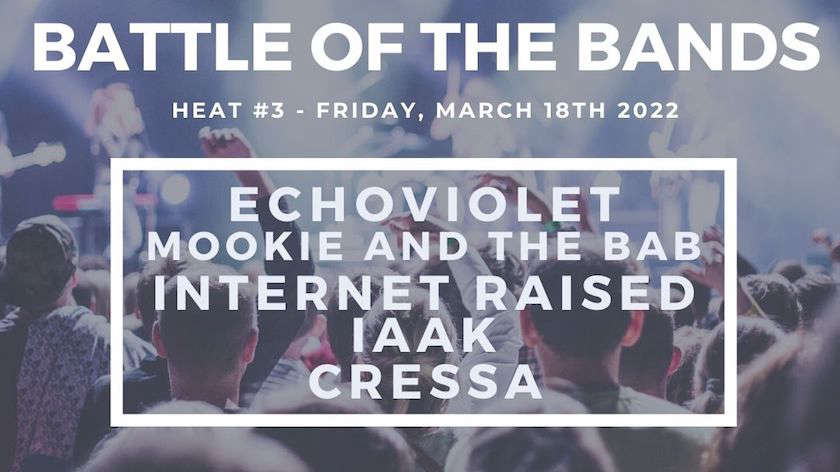 The third of four heats as part of a competition to select up-and-coming performers for this year's Gateways Festival is taking place on Friday night in Keighley.

Cliché Cult won the first heat and then Wilko Wilkes won the second heat on Friday (11th March) so both acts go through the the final of the Battle of the Bands competition on 1st April.

On stage at the Exchange Music Venue & Arts Centre this Friday (18th March) will be another five acts hoping to make it through to the final of the process next month, and ultimately win a place on the stage in Skipton's Aireville Park in July.

Tickets are free - on the door or in advance from exchangearts.co.uk

Here are the acts in the third heat on Friday from 7.30pm...

Hailing from Bradford, Echoviolet are a four-piece alternative rock band formed in 2019. The band's influences range from artists as diverse as Pink Floyd, Radiohead, Foo Fighters and Nick Cave, while carefully weaving their influences together in order to create a sound that is uniquely their own. In November 2019, Echoviolet reached the finals of the Bingley Weekender Battle of the bands competition. In 2020, the band was accepted onto the respected MAS Records Artist Development Programme. Echoviolet released their debut EP, titled "It's Just Begun" in May 2021 and are now recording their first album.

Mookie + The Bab are an all-acoustic alt-folk group, expressing frustrations in relation to the climate emergency, floods, fires and desertification, and explore themes of hope and kindness. Acoustic guitar, Mandolin, Fiddle, 4 piece layered harmonies, and the occasional bit of trumpet, captures the sound of the American Southwest, whilst remaining true to British working class roots. Some key influences include Bob Dylan, Lumineers and Fleetwood Mac, however there are many artists, musicians and sounds that could be credited as providing inspiration, guidance and education. After writing new material over the lockdowns, Mookie + The Bab are now in the studio recording their debut EP which will be due for release in Summer 2022

The members Oliver Pinder (21, from Wakefield) and Vanessa Maria (27, from Manchester) were both raised in Bradford and have shared a strong passion for singing and songwriting from young ages. ‘Internet Raised’ derives from the idea of how our youth today look up to and are influenced by a third parent - the internet. All of their songs are predominantly based on the concepts and themes of love, loss and growing, as well as the experimenting and improving yourself. The duo’s name came from a poignant lyric in ‘A World Alone’ from Lorde debut album ‘Pure Heroine’; an artist whom is a large inspiration to the duo. They are heavily inspired by artists such as Lauv for his upbeat pop anthems, MUNA for their dark undertones and Jeremy Zucker for his darker bedroom-pop vibes.

In mid-2020, the duo took some original demos to James Kenosha, an illustrious Producer, known for his works with Birdy and Rhodes, and expanding on Oliver’s existing production. Throughout 2021, they released 3 singles ‘Better’, ’Burning Sheets’ and ’7 Wonders’, played their first ever headline show selling out 2 hometown shows in Leeds and played a number of gigs. The duo are gearing up for a big 2022, with plans of an EP to be released later in the year.

iAAk are John (lead guitar & vocals), Will (bass) and David (drums). They are an established power trio from Keighley with an overwhelming desire to play with intensity, moving people both inwardly and on the dance floor. You can find them at Jam on Top studios playing it loud, both in rehearsals, jamming and collaborating as they work together on new material. They play their own, particular brand of hard-edged rock, infused with punk to convey their experiences of relationships, society, love and excess. Together they have developed their style to be the unique sound that comes across strongly in their music, from heart felt rock ballard-esque tracks to the tracks that showcase their heavier side, complete with drum solo! Their musical influences are eclectic and are a fusion of genres. All of the band members have grown up surrounded by musical influences, listening to music has been a constant.

iAAk play their own originals and process covers in their deadly, bespoke noise factory, always keeping it loud and energetic. As a band they think outside of the box when it comes to covers. iAAk are constantly evolving and developing new material and nothing thrills them more than the prospect of playing to crowds of fellow music lovers. iAAk recently released their debut album “Half Step Down” across all platforms and are working towards releasing physical copies. Work has already begun on new material ready and they are planning to head back into the studio at the end of the year.