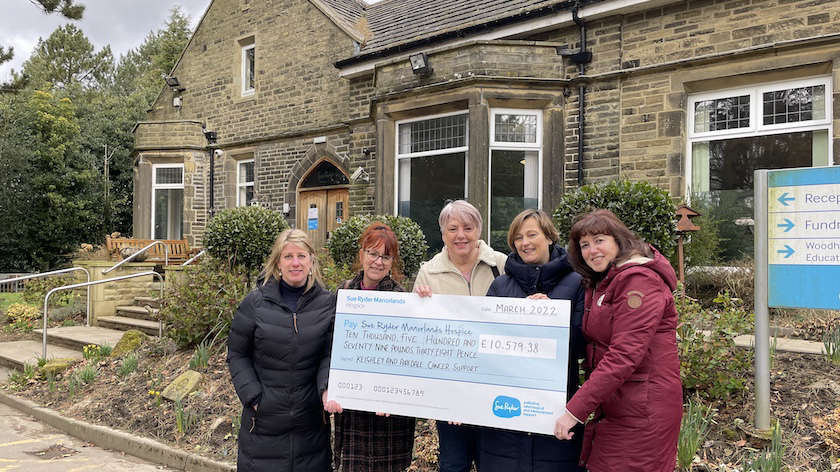 A cancer support charity which was forced to close as a result of the coronavirus pandemic has donated its remaining funds to a local hospice.

Keighley and Airedale Cancer Support, which gained charitable status in 2016, was set up in 2011 by local women Rachael Moorhouse and Adele Smithurst after they were both diagnosed with breast cancer.

Since then, it has provided holistic therapies and emotional support to hundreds of people across Keighley and Airedale living with cancer, with the help of a dedicated team of therapists and volunteers.

Recently the charity announced that it had made the difficult decision to permanently close, after the impact of the coronavirus pandemic had a devastating impact on its fundraising income.

The trustees decided to donate the remaining funds of £10,579.38 to Sue Ryder Manorlands Hospice at Oxenhope which provides specialist palliative care and support to local people living with life-limiting conditions, including cancer.

Trustee and co-founder of Keighley and Airedale Cancer Support, Rachael Moorhouse, said: “It was with great sadness that we decided to close, but it proved too difficult to keep afloat during the pandemic. However, we are delighted that the remaining funds have gone to Manorlands Hospice, who will put it to good use supporting those affected by cancer. We would like to thank everyone who has been involved and wish everyone the very best for the future.”

Liv Moffat, Community Fundraiser at Manorlands, said: “We were incredibly sad to hear that Keighley and Airedale Cancer Support had been forced to close down due to the impact of the pandemic. As a charity, we know just how challenging it has been over the last two years.

“We’d like to thank the trustees for choosing our hospice to receive this significant donation, where it will continue to be used to support local people going through the most difficult times of their lives.”