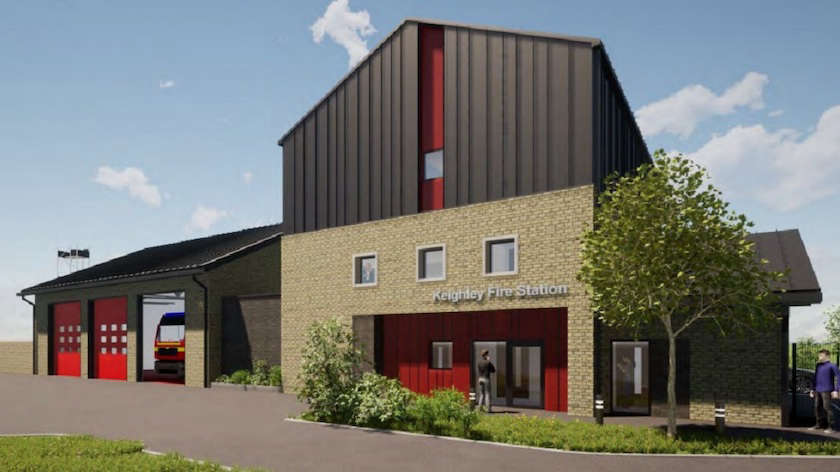 Work to build a new fire station in Keighley will start later this year, and is expected to take two years.

Proposals to replace the town’s “outdated” fire station were first revealed in 2019 as part of a shake up of West Yorkshire Fire Service’s local provision.

An application to demolish the existing fire station and replace it with a state of the art new facility was submitted by the service late last year, and, almost six months later, the plans have been approved by planning officers.

Work on the scheme, which will cost around £2.2m, is expected to start either late this year or early next year.

Wranglings with Yorkshire Water over the new station’s drainage system is behind the delay in the plans being approved.

The planning application submitted to Bradford Council was for the full demolition of the Bradford Road station and the construction of a new three storey building in its place.

A separate application for a temporary station that would be used while the work is being carried out was submitted at the same time, but a decision on that application is yet to be decided by the Council.

Keighley Fire Station was built in 1964, and the planning application to replace the facility said it was “outdated and no longer meets the needs of a modern day fire service.”

The new build would be more energy efficient, with the application describing the building as a “contemporary take on the existing building.”

The £2.2m funding for the project was included in West Yorkshire Fire Authority’s 2020/21 budget, but the Covid 19 Pandemic led to the plans being delayed.

One of the conditions of the planning approval was that the new station included bat and bird boxes to boost biodiversity at the site.

If the application for the temporary station is approved, it would be built on the north of the site, and comprise an existing building and pre-fabricated extensions.

A spokesman for the fire service said: “Planning approval for a temporary fire station for the duration of the build phase is still required to maintain full fire service coverage for Keighley and the surrounding areas and this is anticipated in the coming weeks.

“Additional consultations have taken place to satisfy various regulations and authorities about the site’s drainage system which has led to a delay in the original timescale.

“Subject to approval of a temporary station, it is anticipated the project will go out for full tender in the early summer with tender bids received, scored and presented for approval at the Fire and Rescue committee in late 2022.

“Subject to approval of this, the build is anticipated to start in late 2022 / early 2023, with an approximate construction period of 24 months.”