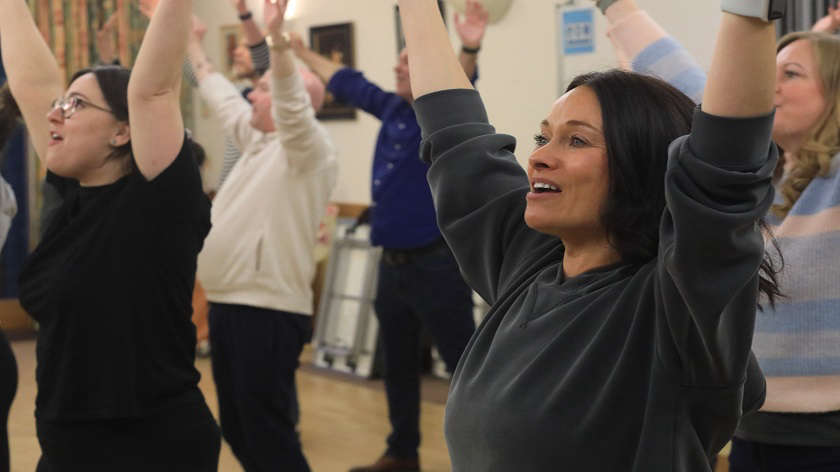 Rehearsals for Singin' in the Rain

A musical to lift spirits opens next month at Ilkley Playhouse, Caroline Mutton reviews that and other forthcoming events.

Musicals make you feel good; they lift your spirits and provide you with a bit of escapism for a few hours. And we all need a bit of that, especially after the difficulties of the last two years. So we’re delighted that the musical Singin’ in the Rain is opening in the Wharfeside Theatre on Tuesday 7th June.

Rehearsals are in full swing and it promises to be an irresistibly charming production. The stage production of Singin’ in the Rain is based on the classic Metro-Goldwyn-Mayer film, regularly voted the most popular film musical of all time. Journey back to the glamour of Hollywood during the roaring 20’s. Silent movie star Don Lockwood has it all, a string of hit films and a studio-engineered romance with the most beautiful actress in town. What Don doesn’t know is that the silver screen is about to find its voice, and a chance meeting with a talented young chorus girl set to steal his heart promises to change both Don and Hollywood, forever. With fabulous costumes, brilliant musical numbers (Good Morning, Make ‘Em Laugh, Moses Supposes, Singin’ in the Rain) and fizzing choreography, this is a feel-good production for the whole family that will keep you humming those famous tunes long after you’ve left the theatre. The show runs until Saturday 18th June with matinees on the 11th and 18th June.

On Friday 27th May Brotherhood of Troubadours perform at Ilkley Playhouse for the first time. Three acclaimed singer/songwriters share the stage; Nick Hall, Jon Palmer and Baz Warne (lead singer and guitarist in rock band The Stranglers). Each has an established pedigree of performing solo and with bands. When they share the stage to sing their own songs, a kind of magic happens which doesn't occur in a solo performance. Spontaneous backing vocals and accompaniment break forth, as well as a fair amount of banter and anecdotes, and possibly a rousing, foot-stomping ensemble number at the end. Brotherhood of Troubadours is not a band. It's possibly a 'music collective', definitely a 'Song Writer’s Circle'. It's certainly a great way to experience their music.

On Saturday 4th June The 309s bring their special brand of swing dance music to the Wildman Studio. The band play songs from the 1940s and 50s alongside a great bunch of self-penned material that sounds like it was written sixty years ago. Fronted by two top singers and a wild fiddle player, the band put a smile on everybody's face with toe tapping rocking and rolling rhythms. Please note that this is a seated event with some limited space to dance.

As part of Refugee Week 2022, Wharfedale Amnesty is delighted to be showing the animated Danish documentary film, Flee, in the Wharfeside Theatre on Sunday 26th June at 7.30pm.Nominated for three Oscars (best documentary; best animated film; and best international film) and two BAFTA awards, Flee tells the extraordinary true story of a man, Amin, on the verge of marriage – which compels him to reveal his hidden past for the first time. Please note that all surplus funds will go to Amnesty International UK. The bar will be open before and after the film, with the opportunity for a discussion about the film afterwards.

For details of all our plays and events and to book tickets visit www.ilkleyplayhouse.co.uk or contact Ilkley Playhouse box office on 01943 609539.