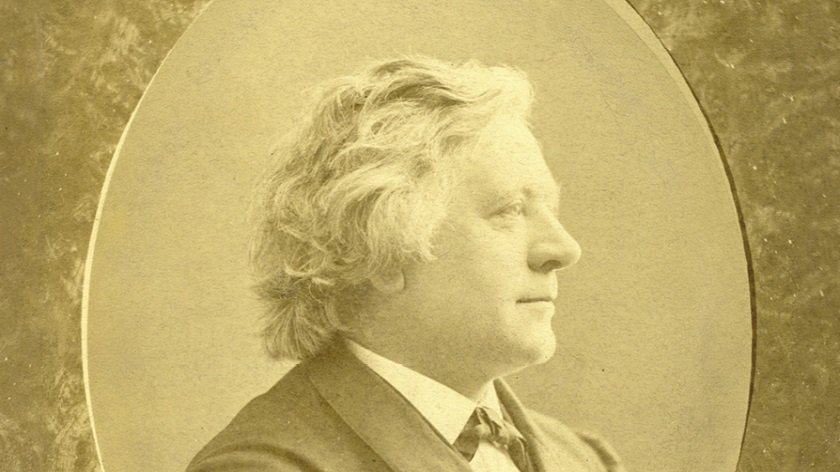 Mike explains how he found it to be a life filled with adventure, triumphs, and tribulations:

“Collyer was a blacksmith in Ilkley who emigrated to America in 1850 and became a famous preacher in Chicago and New York. His story captured Mike’s interest soon after he came to live in Ilkley in 1970 and he has been researching Collyer’s life and times for over 40 years.

“Born into poverty to mill workers, Collyer began work in West House Mill, Blubberhouses, at the age of eight. His job was a relentless one, changing the bobbins on the flax spinning frames, and from the outset he had to work the same hours as the adults, 76 hours a week, in appalling conditions. At the age of 12, fearful that he would soon contract the diseases and deformities so prevalent among workers in the mill, his parents secured him an apprenticeship at the smithy in Ilkley.

“He spent the next 12 years as a blacksmith, living in the village, and in due course becoming foreman at the smithy and a Local Preacher in the Methodist Church. He married, but tragically his wife died giving birth to their second child, a daughter who also died a few days later. Mourning the loss of his wife and feeling increasingly frustrated by his unfulfilled ambitions, he decided to emigrate to America. Seeking a new life there, he first found a new wife, and set sail to the land of opportunity. Once there, he quickly found work, at a hammer factory near Philadelphia.

“Over the next nine years in Pennsylvania, he established a growing family, and a growing collection of books! He had an insatiable appetite for reading and self-improvement. On Sundays, Collyer preached in the Methodist churches in the area, and then came a remarkable opportunity. Without theological training or pastoral experience, he was offered the post of ‘Minister-at-Large’ at a Unitarian Church in Chicago, an ‘outreach’ post that he gladly accepted. As a formidable preacher and public speaker, Collyer quickly earned the respect and trust of the people of Chicago. It was Collyer who took money collected in the city to the victims of a tornado in Iowa, and three years later he was dispatched to Kansas with the Chicago Relief Fund to help the survivors of a massacre by Missouri raiders. Soon after the start of the Civil War he joined the newly established U.S. Sanitary Commission to give aid and comfort to wounded Union troops, and later became a major figure in fund-raising and recruitment for the Union cause.

“Tragedy struck again when Collyer’s church and home were destroyed in the Great Fire of Chicago in 1871 and he took a leading part in bringing relief to the victims and reconstruction of the city. He emerged from these setbacks with ever increasing stature and was widely recognised as one of Chicago’s leading citizens. In 1879, however, he was persuaded to become minister at the once-great Church of the Messiah in New York, a move that consolidated his national standing in the Unitarian Church.

“While firmly set in America, Collyer maintained close links with Ilkley, and returned on numerous occasions to see family and old friends. In his lifetime, Ilkley grew from a rustic village to a popular inland resort; the population underwent a ten-fold increase, and through his return visits to the town we are reminded of these developments. In later life he returned to carry out civic engagements, such as the opening of the town’s first museum, and on a final visit in 1907 he opened Ilkley’s new public library and was awarded an honorary degree at Leeds University. In this way, the humble blacksmith was recognised by academia as a man of letters. Quite a journey.

“Collyer died in New York in November 1912, one week before his 89th birthday, and was remembered as “A man of cheerful yesterdays, and confident tomorrows.” His is a story well worth sharing.”

From Anvil to Pulpit is on sale at the Grove Bookshop, Ilkley, and costs £14-95.