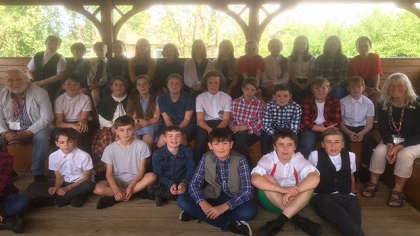 Councillors from Ilkley Town Council visited Ben Rhydding Primary School this week to meet with year 5 and 6 children and talk about a Climate Action project they have been working on.

Cllr Ros Brown had previously informed the Council about the excellent and thoughtful work produced by the children about Climate Change and what can be achieved at a local level to try to halt global warming and reduce carbon emissions.  Ilkley Town Councillors had been extremely impressed with the work of the children and agreed with the suggestions and ideas raised.

Cllr Peter Mate and Cllr Pauline Allon visited the school on Monday 19 July and explained to the children that as the Council had declared a climate emergency and it was therefore not only important to thank the children for their hard work but also to listen to what the children thought about climate change and how future carbon emissions could be reduced.

The councillors said: “Climate change affects the lives of everyone in the Town, but particularly the lives of young people who represent the future of Ilkley.

“Through their project, the children suggested different kinds of action that local people could take to reduce global warming, such as planting more trees, creating more allotments, reducing traffic on the roads, use of solar panels and increasing walking, cycling and public transport. Many of the children had highlighted the need for more recycling and reduced use of plastic and the need to protect all wildlife.”

“We were delighted to hear the children express their views about what they thought the Council in Ilkley did, and again, their knowledge and ideas were relevant and interesting.

“We rounded off the discussion by talking about walking to school and holidays and proposing a visit of the school to the Council Chamber so they could see where local decision making happens.

“A round of applause concluded the discussion which had certainly been enjoyed by all.”