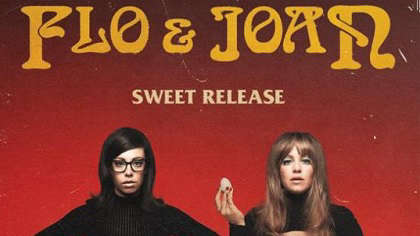 Flo & Joan at the King’s Hall in February

Following hit performances on shows including Live at the Apollo, Royal Variety Performance, The Russell Howard Hour and their own Amazon Prime one-hour comedy special, Flo & Joan are back with a brand new show for their biggest ever UK national tour, Sweet Release coming to King’s Hall, Ilkley, on 24 February.

With over 60 dates the musically talented and hilarious sisters are set to climb out of their pits, armed with a piano and percussion section to bring you a brand-new show of their critically acclaimed songs and comedy, poking around all the classic topics of the day: over-thinking, alien lovers and fringes.

Flo & Joan are the multi-award winning British musical comedy duo, and sisters, Nicola and Rosie Dempsey. The piano/percussion pair have headlined and played to sold-out audiences across the UK, North America and Australia, and their hour-long special is streaming in over 200 countries on Amazon Prime. The pair’s songs have taken them around the world and in 2019 they debuted at the Melbourne International Comedy and the JFL Montreal Comedy festivals.

The pair have had high-profile television appearances on Live at the Apollo (BBC2), The Royal Variety Performance 2019 (ITV), Jonathan Ross’ Comedy Club (ITV) and The Russell Howard Hour (Sky) and their songs regularly go viral online, having received over 55 million views to date.

They recently contributed five original songs for the West End Musical Death Drop and have written and performed songs for television shows including Horrible Histories (CBBC), Rob Delaney’s Stand Up Central (Comedy Central), BBC Radio 4’s The Now Show and Fresh From the Fringe and This Hour Has 22 Minutes (CBC).

A hugely acclaimed live act, their fourth Edinburgh show, Before the Screaming Starts, completely sold-out its run at the Edinburgh Fringe Festival and added extra shows to keep up with demand before selling out on tour across the country. The pair’s accolades include Top 10 Show of the Edinburgh Fringe at the Amused Moose Comedy Awards, Chortle’s Best Music and Variety Act, Leicester Comedy Festival’s Best Musical Act, Montreal Sketchfest Best of the Fest Selection and Toronto Sketch Comedy Festival’s

For further information or to book tickets call the Box Office on 01274 432000 or visit bradford-theatres.co.uk