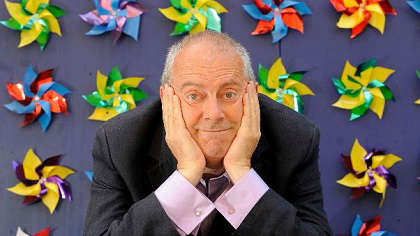 Booker-prize authors, poets, philosophers, comedians and broadcasters head to the 2021 Ilkley Literature Festival this October, which runs from Friday 1 to Sunday 17 October.

Headline appearances include Booker Prize winner Bernadine Evaristo, who will discuss her latest book Manifesto, an inspirational account of her creative rebellion as a writer, teacher and activist.

Journalist Sarfraz Manzoor shares his memoir They, weaving history and reportage to tell the story of today’s divided Britain. In partnership with Keighley Arts and Film Festival and Keighley Film Club, there’ll also be a screening of Blinded by the Light, co-written by Manzoor and inspired by his teenage years and love of Bruce Springsteen.

Other headliners coming to Ilkley this autumn include festival favourite Gyles Brandreth with his memoir Odd Boy Out; Countdown star Susie Dent with Word Perfect; and Miles Jupp, from the hit sitcoms Rev and The Thick of It and BBC 4 Radio, in conversation with novelist Lissa Evans, who also produced and directed Father Ted.

Scotland’s former National Poet, Jackie Kay, will explore the extraordinary life of the great blues singer Bessie Smith. The festival will also showcase new commissions from its 2021 Poet in Residence, Ian Duhig, a multi-award-winning poet and judge of this year’s Costa Poetry Prize, and its 2021 Apprentice Poet in Residence, Rheima Robinson.

Founded in 1973, Ilkley Literature Festival is the North’s longest-running literary event, loved by writers, readers and publishers alike for its warm welcome and wide-ranging programming. Its impressive reputation is built on its ability to bring writers of national and international significance to West Yorkshire audiences.

This year, there are three strands of thought and discussion which feature in the autumn programme: Unreliable Narratives, Belonging and Pioneering Women. These run throughout the in-person and digital events, workshops and micro-commissions.

Live events will take place at the King’s Hall and All Saint’s Church.

Erica Morris, Ilkley Literature Festival Director, said: “It’s a joy to be returning to live events this autumn. We have listened to our audiences and understand that retaining Covid-secure precautions is important for them to feel comfortable and safe. As such, live events will have reduced capacity, one-way systems, and hand sanitiser available. At the same time, we are expanding our digital offering, providing more opportunities for audiences to access festival events. After the anxieties of the last 18 months or so, one thing the pandemic has highlighted is how culture and the arts enrich our lives, so we hope the festival offers a thought-provoking, entertaining and inspiring tonic.”

Tickets will go on general sale from Tuesday 31 August. Friends of the Festival enjoy a priority booking period from 24 August. Friends’ memberships can be bought via the festival website at www.ilkleylitfest.org.uk where you can also view the full programme.