Drop-in draws villagers to learn about the u3a 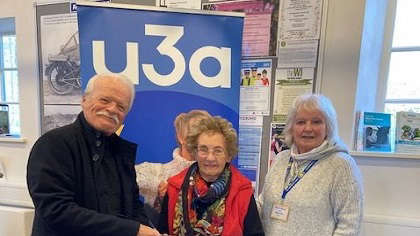 Ilkley & District u3a held a successful Drop-in at the Hub in Addingham last Friday, 1 April. There was so much interest that at one point the room was full with standing room only.

The Drop-in provided a chance for local people to speak to u3a Trustees and volunteers and discover more about the u3a. With over 140 interest groups meeting in Ilkley and the surrounding villages, the organisation has plenty to offer those in the area who are retired or semi-retired.

There was an opportunity during the morning to make the draw for the correct answers to last month’s photo quiz. The quiz featured well known landmarks in Addingham so it was very appropriate that the draw was won by Addingham resident, Pamela Parrington. Jim Robinson, Chairman of Addingham Civic Society, presented Pamela with her prize, a £25 book token.

For further information about Ilkley & District u3a, come along to one of the regular Drop-in sessions in Ilkley. These are held on the first and third Friday mornings of the month in the Clarke Foley Centre, Cunliffe Road, Ilkley from 10.30 - 12 noon when there is a further opportunity to chat to Trustees and Group Leaders over a cuppa.

Joining the u3a is easy. Membership is only £7 until renewal in August and is open to anyone in the area who is retired or semi-retired. Information on the u3a and how to join is found on the website at ilkleyu3a.org, on Facebook and Twitter.