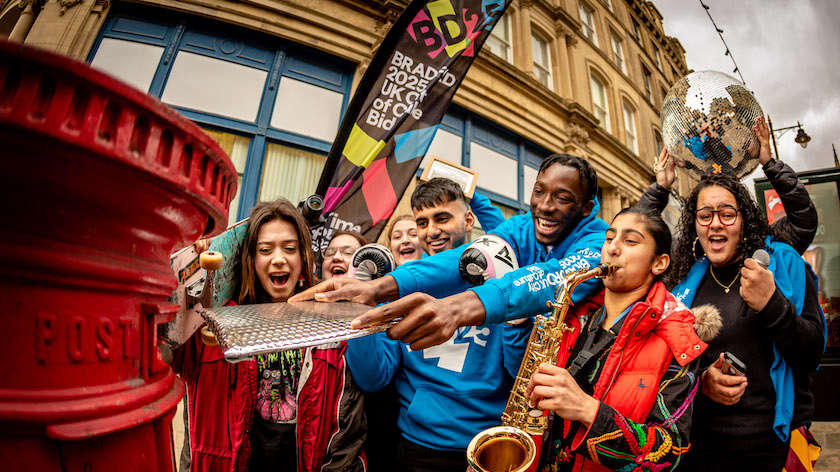 The Bradford district's formal bid to be UK City of Culture in 2025 has been officially sent in to the Department for Digital, Culture, Media and Sport.

Young people from across district gave the application a celebratory send-off as it makes its way to London. Bradford joins seven other long-listed places from around the UK in submitting a final bid to the government today.

The full bid contains detailed information about what Bradford’s potential year as UK City of Culture would look like - with thousands of spectacular events, increased access to culture, and innovative new uses for the district’s historic settings all in the pipeline. Hundreds of people and groups from all across the district have contributed to Bradford’s bid in some way, and young people in particular have been instrumental in outlining their ambitions for the landmark year.

Representatives of Bradford’s young people – who have either been involved in the bid writing process or are part of the district’s creative community – came together in the city centre to give the bid the final ‘seal of approval’ before posting it off to the judging panel in London. Among the assembled group of young people are Ambassadors from Bradford Council’s Youth Service, Healthy Mind Apprentices who teach music skills to other young people, and members of Bradford 2025’s Equality and Inclusion Reference Group.

Keighley's Shanaz Gulzar, chair of Bradford 2025, said: “This is a defining moment for the district. All the hard work over the last 2 years has generated an energy right across the district, giving rise to new collaborations, connections and creative conversations which have helped us create what we feel is a winning bid. Thousands of people have helped shape Bradford’s bid and while we can’t say too much at this stage as we want to keep our bid to be full of surprise for the judges and our citizens, it’s very much by Bradford and of Bradford. It’s also timely as Bradford was recently named by an independent report as the city with the most to gain from the levelling up agenda. It seems everyone is realising what we’ve long known; Bradford is a city with huge ambitions, and so much potential.”

“At the heart of our bid is our young people, and I’ve been so impressed by their enthusiasm and aspiration; they really have embraced the opportunity to play a far more active role in shaping their future. We’ve done all we can and now it’s over to the judges. But thank you Bradford, we really do believe this is our time.”

Councillor Susan Hinchcliffe, leader of Bradford Council said: “Culture is hugely important, we believe it can make a sustainable contribution to the prosperity and happiness of everyone in the district and it is vital as we recover from the COVID pandemic and strive to level up with the rest of the UK. Thousands of people from across the whole of our district and from its many diverse backgrounds have been involved in the creation of this bid. Our district is truly a unique place with so much potential and its people really deserve to win this accolade and show the world that this is our time and our place.”

An independent panel of judges will now review the bid submissions and up to four places will be shortlisted in March. Judges will visit the shortlisted cities in the Spring before announcing the winning applicant at the end of May.