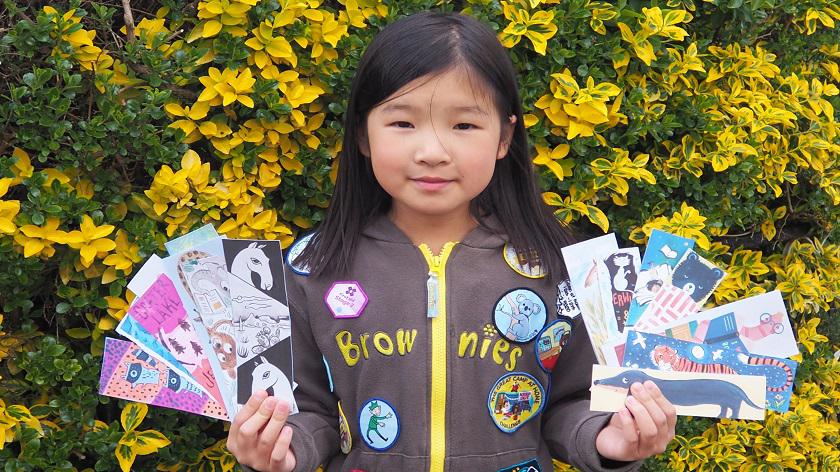 8 year old Alyssa showing the bookmarks to be auctioned

A group of Yorkshire Brownies, has received support from A-list celebrities such as Dame Helen Mirren and author Sir Quentin Blake for its project to raise funding for a school in Zimbabwe.

Every year the girls of the 1st Burley Brownies, based in Burley-in-Wharfedale near Ilkley, write letters to their favourite authors, illustrators and celebrities asking them to design a bookmark.

The Bookmark Project is now in its fifth year and all the money raised is used to support Katiyo Primary School in Zimbabwe. All the bookmarks received will be sold by online auction between 7pm on 10 May and 7pm on 24 May and members of the public can bid on their favourite bookmarks.

Brownie Leader Sharon Hattersley said: “Over the years the Brownies have helped to raise over £20,000 for the school. This money has helped to build blocks of toilets, provide desks and benches for all the classrooms, bought reading books and supported a number of other projects.”

Sharon added: “This year the funds raised will go towards building nursery classrooms for the youngest children who currently have none. We will combine the proceeds of this year’s auction with funds already raised and hope to be able to start the building project in the next 12 months. We are in the process of drawing up preliminary building plans.

“We have also been asked to provide textbooks for the grade 7 students and to help purchase large water storage tanks.”

The 1st Burley Brownies is made up of 24 girls aged 7 to 10 years, and their leaders. The group is over 100 years old and have been supporting the school in Zimbabwe for 20 years.

The group has exchanged letters and WhatsApp messages with the teachers and children at the school and Brownie leaders have visited the school twice.

Several of the girls earned their charities badges in the autumn raising over £3000 for the school through a sponsored swim and run, home baking delivery services, crafts sales & an online appeal.

To take part in the auction go to www.jumblebee.co.uk/bookmarkproject2021 between 10-24 May.