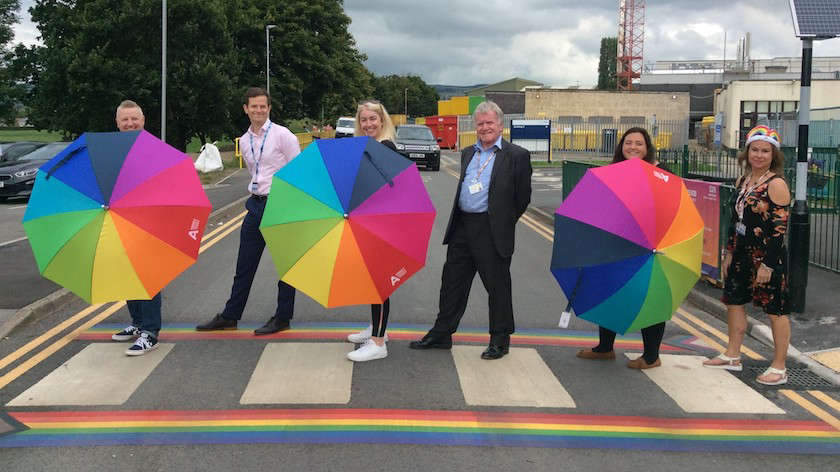 Four new rainbow pedestrian crossings have been painted at the main entrances and car parks at Airedale Hospital and were unveiled during Pride in the NHS week.

The crossings represent the Progress Pride flag which is an updated version of the LGBT Pride flag containing a chevron of black, brown, light blue, pink and white stripes to include a wider community (marginalised people of colour, trans individuals, those living with HIV/AIDS and those who have been lost), with the original six-stripe rainbow design as the base.

Airedale NHS Trust says the painted crossings represent its commitment to equality, diversity and inclusion, and show that it is an open and non-judgemental place for LGBT+ patients, staff and visitors.

The Trust LGBT+ network works to create a safe, inclusive and diverse working environment that encourages respect and equality for all. The network has recently rebranded itself as the Rainbow network, to include more people such as allies and those who may not feel ready or open to identify as LGBT.

The Rainbow network decided to install these crossings to coincide with its relaunch, with funding from Airedale Hospital and Community Charity, and help from the Trust’s Estates team, AGH Solutions.

The network also organised a Pride in the NHS event in the hospital restaurant, where people could celebrate the LGBT+ community while learning more about the group and how they can get involved.

Gareth Williams, Chair of the ANHSFT Rainbow Network, says: “Our colleagues are wearing the rainbow badge, and we now have the progress flags on crossings within the hospital grounds. This shows that Airedale NHS Foundation Trust is becoming more inclusive and supporting of colleagues and patients who identify as LGBT+ and that change is happening.

“We wanted our Rainbow Network to be inclusive, rather than exclusive. By having an active staff network, we can educate people and promote inclusivity, which will be beneficial to everyone.

“The crossings will act as a visual assurance. They’ll also create conversations which will help us to break the stigma, and allow us to work together for a truly inclusive and accepting community.”