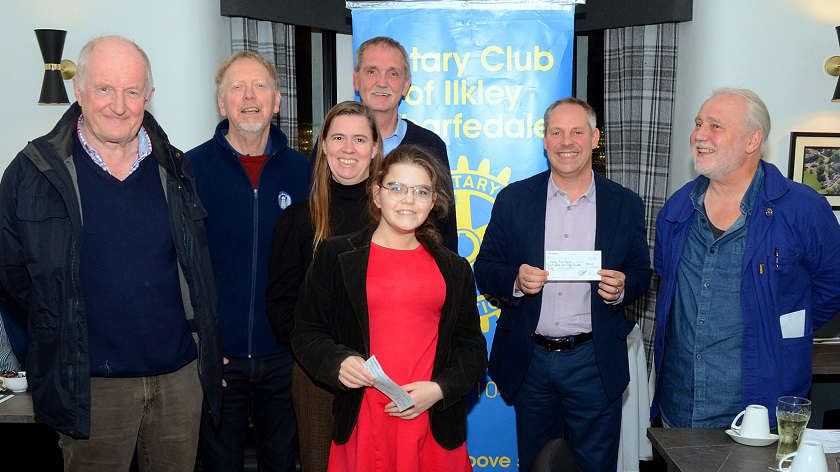 Following Ilkley Wharfedale Rotary Club’s first attempt at a duck race last August raised almost £2,000 and President of the Club, Marten Koopmans presented cheques to four charities from the proceeds of the event at the Club meeting on 23 November.

The Rotary Club Community and Vocational Chair, Peter Mate introduced the recipients who, in turn gave a short talk on the work of their charities.

The first recipient was the charity – LS29. Represented by Helen and her daughter Charlotte. LS29 now reach as far as Skipton (approximately a seven mile radius from Ilkley) and have over 100 families with special needs registered with them. As well as offering support for the families many of them are now organising their own get-togethers such as for a meal out or a trip to the cinema. The donation to LS29 is specifically so that some of the children can go to the pantomime which, it was thought, will probably be Aladdin. Another reason for the donation is that LS29 sold a great deal of tickets for the duck race held by Ilkley Wharfedale Rotary Club at the end of August.

Next, a cheque to Nell Bank. There is a link here in that this donation is to pay for a whole day for children from LS29 to come and experience a day there. Chair of the Trustees, Richard Bourdon, explained that Nell Bank was on the point of becoming legally separate from Bradford Council thus becoming a fully independent charity. This is an exciting time for them particularly having been able to open again after the COVID restrictions. Nell Bank offers day and residential experiences for children from across the region, many of whom visit from deprived and inner city schools with limited access to the countryside. All visits are linked to the National Curriculum, supporting both subject-specific outcomes, the children’s personal development, and their physical and mental wellbeing. Peter Mate explained that Helen’s daughter Charlotte was one of the first LS29 children to use the wheelchair swing at Nell Bank.

There followed a cheque for Ilkley Food Bank which was first set up on 7 May, 2013 under the auspices of CTI (Churches Together, Ilkley) and is run by a committed volunteer team headed by Jane Wearing and Sandra Dexter. Beneficiaries are referred through recognised agencies such as the Citizens Advice Bureau, GP practices and other healthcare professionals, Job Centres and churches. Tim Kingsman is chair of the Trustees of the Ilkley Food Bank which was formalised as a charity in the summer and is now separate from CTI. Up to 60 families are currently regularly getting assistance from the food bank within the Ilkley area.

And finally, a cheque for Ilkley & District Good Neighbours represented by Ed Duguid (Deputy Chair of the Trustees) who organises the Christmas hampers for some of the elderly residents around Ilkley, something that has been going on for over 25 years. This year it will be on the 7 December. A popular element of the delivery of the hampers was the involvement of Ilkley Grammar School. Unfortunately, this has not been possible since the breakout of COVID but Ed hopes that it will be possible to start that again, maybe next year.

The next Ilkley Wharfedale Rotary Club Duck Race event is scheduled to be on 2 May 2022 in partnership with Ilkley Carnival 2022.