Glitter Ball raises over £4k in memory of local DJ 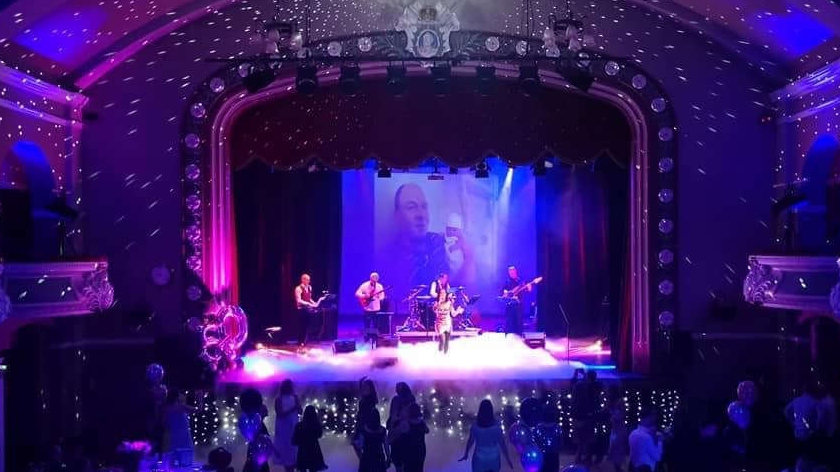 A fundraising ball in memory of Dominic ‘Disco Dom’ Hanbidge, a well know local DJ and electrician, has raised a fantastic £4,121.75 for Sue Ryder Wheatfields Hospice.

Dom passed away in October 2020 after a short illness with cancer. Dom’s widow along with three friends organised ‘discodom’s Glitter Ball’ to celebrate both his life and what should have been his 50th Birthday. The event was also held to raise money for the Hospice who cared for Dom in his final weeks at home.

Held at the beautiful King’s Hall and Winter Garden in Ilkley, guests enjoyed live entertainment from Mark Gregory from Mark Your Occasion and The Sarah Brickel Band. Dom’s DJ friends provided a disco to end the night.

Dom’s widow, Jennie Hanbidge, gave her thanks at the event to each and every person who supported, donated and attended the ball. Jennie said “I would like to thank all the local businesses who provided raffle prizes, which helped raise such an amazing amount of money, to singer Mark Gregory and The Sarah Brickel Band for such great entertainment, the King’s Hall staff for their help and support and finally all those who attended on the night, thank you so much for making it such an amazing evening in memory of my husband Dom.”

“Due to the pandemic, we were unable to have a wake attended by Dom’s friends and work colleagues. The Glitter Ball gave people the opportunity to celebrate Dom’s life and come together in making it such a special night."

Jennie has now raised over £10,000 for Sue Ryder in the past 12 months and is incredibly grateful to everyone who has donated to the Hospice.

Michelle Darbyshire, Community Fundraiser for Sue Ryder said: “I'd like to say thank you to so many people who came together to raise such an incredible amount in Dom's memory. Thank you also to Jennie and the committee who worked tirelessly to put this fantastic night together.”

“Sue Ryder Wheatfields Hospice can continue to be there for more people when it matters, ensuring the end of someone’s life is filled with the things that matter – spending time with loved ones, sharing stories and memories and filling their final days with love. At the end of life, every moment with our loved ones counts. On behalf of everyone at Sue Ryder Wheatfields Hospice, thank you."

Plans are already underway for discodom’s Glitter Ball in 2022, to be held on Friday 30 September, once again at the King’s Hall and Winter Garden. Please save the date!